MY HUSBAND and I are both smart, which is nice. You don’t get scammed when you’re smart, and I’ve always thought scams sounded lame and avoidable, yet mysterious. So last week, when we got a postcard inviting us to be scammed, we thought we’d go forward just to see how it feels. Last Saturday evening we attended a 90-minute sales presentation by TOURICO VACATIONS, the prerequisite for getting two free airplane tickets on JetBlue to anywhere in the United States, and a free two-night stay at a Hilton wherever we wanted to go. We bit. Hey, it was either that or a movie and nothing good was playing. And besides, who doesn’t want free stuff? We called the number on the card and made our reservation.

The lady on the phone said to “Come early, so you can get a good seat.” We arrived at the small hotel in Brunswick, Maine, at the appointed hour and made our way to the conference room, where we were greeted by the telephone lady. She asked if we had come ready to buy something. “Did you bring your checkbook?” she asked, sort of laughing. We said no, not laughing, confessing we had mainly come for the free airplane tickets. She stopped laughing. Eventually nobody else showed up and the Pitch Guy came in, straight from Central Casting and sporting a comically large pot belly and an inky black toupee. He looked like a stand-up comic from the late 1970s, spitting out the same bad jokes. He got started since apparently we were the entire audience. (We had the best seats in the house.)

There was a film showing beautiful beaches with palm trees and cruise ships and Italy and Rome and lots of other destinations. It lasted maybe two minutes, then the TOURICO VACATIONS logo came up and the film ended. Pitch Guy (P.G.) started jabbering about how much money we could save, and that this is not a time share deal, and we would make our money back in two trips and they had 250,000 satisfied customers saving millions of dollars on travel because of their membership in the club. I repeatedly asked the price, but P.G. just skirted the issue and made more bad jokes. Eventually we got some numbers out of him, like $8,995 which quickly dropped to $5,995, then $4,995 and finally $3,995, depending either on this or that variable or the incredulous looks on our faces whenever he mentioned an amount. Plus a $200 annual service fee. 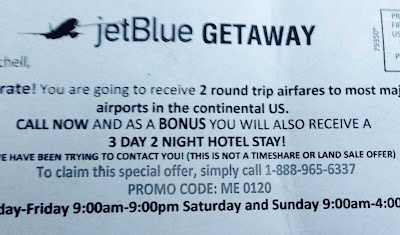 We said we’d like to sleep on it, even though P.G. swore up and down that he was “only able to make my very best offer on this one night only.” We said we’d take our chances and come by the next day with our best offer. We went home and got on our computers and did some research and found almost nothing about TOURICO VACATIONS. I said almost; we found an ABC News video saying the company worked under different names and was a scam, and described our experience perfectly. (Since then the company has hastily thrown up some links to their “website,” and a few falsehoods have appeared on the Better Business Bureau website.)

We decided to go back the next day to claim our free airline tickets and hotel voucher and not join the travel club. Only there was no free anything. We were given cards from TOURICO VACATIONS explaining that the free gifts were from another company, not them, and we would have to register for them and include $75 for the registration fee. Then we would receive information in the mail with instructions on how to get the “free” gifts, but there would be another $150 in additional fees. It was likely, according to one of the few reviews we did find online, that there would be several more forms to fill out, after which we would learn it was too late, it had all taken too long and the offer had expired.

On the way out I stole a chocolate-covered peanut butter ball from the unmanned hotel lobby snack bar. By then I figured I deserved something for free. (BTW, it was to die for.)